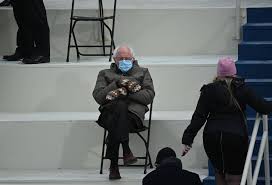 Why is the Bernie Sanders’ mittens meme so popular?  While the media went goo goo over the various dresses, suits and even face masks of the politicians preening on the inaugural stage, Bernie simply didn’t give a damn about appearances.  His disposable face mask probably cost .25 cents and was off-center. The Parka was comically out of place compared to the high rollers on the podium wearing fancy wool top coats. But this was an inauguration, not the Oscars. Most Americans view politicians as a privileged class of showboats who wouldn’t know how to start a lawnmower. But Bernie offers a down-to-earth counterweight to the peacocks on stage, strutting for attention.
The mittens were the ultimate reverse snobbery touch, knitted by a commoner in Vermont. People associate mittens with kids playing in the snow. The politicians around the podium sported fancy leather gloves. Casting appearances aside, Bernie ambled into the inaugural ceremony clutching a manila envelope against his chest, unable to grip the envelope with his mittens, while plopping down in a folding chair. (The envelope contained his inaugural tickets.) When Bernie sat down, he ditched formality and crossed his mittens in a feline manner, aiming only to keep warm. It’s hard to stay warm and look cool at the same time. Like any house cat, he didn’t care what anyone thought.
And the beauty of it all is that Bernie was not deliberately doing a “reverse snobbery” statement, he was just being himself, oblivious to the instantaneous viral meme stampeding across the internet. His staff informed him later that he had inadvertently became an internet sensation. C.S. Lewis said that a humble person will perhaps forget about themselves altogether.
When Bernie was running against Hillary Clinton in 2016, a friend of mine in Nebraska said: “I’ll bet Bernie has mowed his own lawn within the last year.”  A conservative friend of mine in Kansas mentioned to me in 2016 that Bernie was a likable fellow with a cartoonish appearance. Likability is the coin of the realm in politics, and it is tough not to like Bernie and the simplicity of his lifestyle.  Authenticity is what people crave in politics. The image of Bernie’s folding chair informality is being placed everywhere, from outer space to people’s driveways. He is Everyman.
Bernie’s casual “dropping by the post office” attire suggested a great truth: inaugurations are not that big of a deal. We switch Presidents back and forth, every four years. The Founders were clever. This isn’t a monarchy. We don’t have Kings. The Founders knew that absolute power corrupts absolutely. So they split the power three ways, and gave the President a short four year term.
Government should be boring.  It should be  background music, not the major thing in people’s lives. Yet the last four years have shown people clutching to political figures for their identity, their self-esteem, their purpose in life. It’s OK to have fun associating with a sports team, or a hobby or even your ancestry. But George Washington didn’t even want political parties. He warned of the “mischief of factions.”  As my former history teacher wrote to a local State Representative: “Think for yourself.” Don’t outsource your opinions or conclusions to anyone else.
Sadly, a couple of weeks after the invasion of our Capitol in an attempt to destroy Democracy, Trump’s base remains intact. Trump, like most politicians, is flashy, self-absorbed, and hyper-conscious of his appearance, his hair and his image.  People cling to him. And Democrats cling to Biden and Harris. But we shouldn’t cling to people. We should fight for good government, and let God be the object of our worship.
Bernie, thanks for the laugh. We needed it. Politics should not be about people, or parties, or hairstyle or appearances. It should be about ideas.  We need more people like Bernie on both sides, people obsessed with ideas, not appearances. By the way, where can I get a pair of mittens just like Bernies?