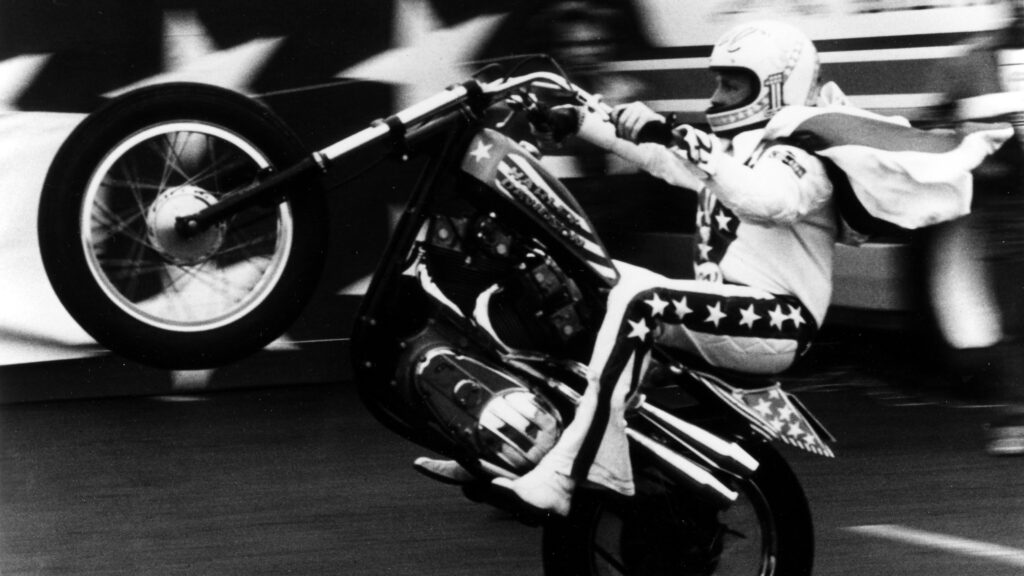 Can the police arrest you for disobeying the Governor’s emergency orders on COVID-19?

A. Kansas laws passed by the legislature and signed by the Governor generally do not make it illegal to risk your own health or safety.

Before we talk about the validity of the Governor’s orders, let’s discuss longtime laws on the books that are passed by the legislature and signed by the Governor.

When I was growing up in Great Bend, we admired Evel Knievel. The pioneering daredevil would jump his Harley-Davidson over buses, cars, and water fountains. His landings didn’t always stick.  His 1972 Harley-Davidson XR-750 weighed 300 pounds, so every jump was risky.

For every landing that stuck, he was more famous for those that didn’t. The stunning crash when he jumped over the fountains at Caesar’s Palace was the most memorable. He bounced around like a rag doll.  After a gruesome crash in London’s Wembley Stadium, he announced he was retiring. But he didn’t.

So when Evel Knievel was booked for the Kansas State Fair for September 25, 1971, why didn’t Governor Docking arrest him and stop him from jeopardizing his health?

The answer is simple: Because he was only risking his own life and health. Fortunately, Knievel landed successfully. If Evel had crashed at the Kansas Fairgrounds and broke both legs and 17 ribs, that was his problem.  It didn’t affect others.

Generally speaking, state laws don’t stop you from doing something stupid that could kill you or hospitalize you, as long as you are the only one at risk.

B. Under Kansas laws, you do not have the right to risk the health and safety of others.

When your reckless behavior hurts others, the Fuzz gets involved. Speed limits, DUI laws, etc. exist so you don’t harm others. These are state statutes that are valid and enforced routinely. Our whole legal system is based on protecting others. Your freedom to hit someone ends at the other guy’s nose. Such laws are well known and have been in the law books for decades. But these are laws passed by the legislature and signed by the Governor, and they were found valid by the Kansas Supreme Court.

C. I understand we need to obey laws passed by the legislature and signed by the governor, but what about these executive orders?

Generally, public health orders are the province of the County Commissioners of each of the 105 counties. The Kansas Governor can suspend state administrative regulations by executive order. Governor Kelly’s orders have been in place for eight weeks and there has not been a single arrest. Governor Kelly is a Democrat, but the Attorney General of Kansas, Derek Schmidt, is a Republican. And the people of Kansas are getting mixed signals.

My guess is that the Attorney General Derek Schmidt advised local sheriffs and police chiefs not to enforce the orders.  Prosecutors love to charge people with every charge imaginable if the person is a well-known troublemaker. Yet the local prosecutors have not charged a single person with violating the Governor’s order. The Governor’s orders are not being enforced.

On Friday, a barber in McPherson was given a ticket for reopening his barbershop too soon in violation of the Governor’s order. He was told the ticket will be dropped if he does not open up this morning.  Watch this case closely.

The Governor could have issued recommendations or guidelines without making them orders. Special efforts were made by the Governor’s legal team on Good Friday and Holy Saturday to ensure that Easter services in Kansas were limited to ten people only.  Sadly, this probably led to more people going to Easter services to defy the Democratic Governor. Some Easter congregants cited the Attorney General’s opinion. The special effort regarding Easter was done out of sincere concern for public health. (The order itself did not mention any particular religion or religious holiday.) Governor Kelly, a Catholic, was trying to do the right thing. However, politics is a tough business, and Republicans are already accusing the Governor of “Criminalizing Easter.”

D. Should you be worried about getting arrested and convicted for disobeying orders made in Kansas regarding COVID-19?

The orders aren’t being enforced, so it’s a non-issue. Would a McPherson County jury punish a barber for trying to make a living? I doubt it. But that assumes it would ever get to a jury trial. There would be Motions to Dismiss on the grounds that the orders were not valid or done correctly.

E. If the Governor’s orders are not being enforced and possibly invalid, should we still follow them?

I walked into a Wichita hardware store two weeks ago without a mask. I left my mask in the car.  And standing in line I saw a man I knew to be a strong Christian wearing a very tricked-out mask. I watched the man, and he scrupulously kept six feet away from the next guy in line.

Many have COVID-19 and do not know it for two weeks when the symptoms show up. And here I was walking around ACE HARDWARE wearing no mask. I was willing to take the risk of ME catching the disease. But COVID-19 is not like Evel Knievel. The charitable thing to do would be for me to wear a mask because I might have COVID-19 and inadvertently transmit the disease to someone else at the hardware store. It could kill them.

F.  Why does the government have souped-up powers during disasters and pandemics?

During emergencies and disasters—tornadoes, wars, pandemics, floods—the government has more leeway than one might expect. But the government should use common sense.

During the Hoisington, Kansas tornado of April 19, 2001, the tornado missed a friend’s house by two blocks. But his 89-year-old mother’s house two blocks away was leveled.  She was buried alive. When emergency workers dug through the rubble and saw her flashlight and heard her voice, they saved her life. Her son then rode with his mom to the hospital in Great Bend. (The Hoisington hospital was disabled by the tornado.) I met my friend and his mother at the Emergency Room in Great Bend and helped her get good care.  Once his mother was admitted to the hospital, I drove the son back to Hoisington so he could go home.

When we got to the outskirts of Hoisington, there was a police blockade.  A Highway Patrolman told my friend: “Sir, you cannot enter the City of Hoisington.” My friend said:  “I was in Hoisington, and my mother was buried alive. I live on 4th street. I just took her to the hospital in Great Bend. I’m just returning. My attorney gave me a ride home. My attorney is in that car.” The Highway Patrolman said: “We aren’t letting anyone in.” My friend said: “Well, I’m going in. Shoot me.” He walked past the police line and walked home.  No shots were fired.

What is the takeaway here?

Governor Kelly had to make some snap decisions for Kansas COVID-19 laws, even though she knew she would lose votes in rural areas. It was unfortunate that the Republican Attorney General didn’t back her up to save lives. But Americans don’t like the government bossing them around. Twenty-two Kansas counties don’t have a single case of COVID-19. So they don’t feel they should be a part of the orders.

As citizens, we should not disobey an order simply to be rebellious. There is a place for civil disobedience if a law or order is grotesquely unjust, but this isn’t the case here. People of faith lose credibility when they do what I did at ACE HARDWARE. Being a good neighbor and being unselfish is a core spiritual principle. St. Paul admonished people to “obey the governing authorities.”

Because America’s last pandemic was the Spanish Flu epidemic of 1918, most Americans and most politicians were taken off guard by COVID-19. I get lots of calls about COVID-19, many involving employment issues, enforcement issues, and liability issues. It will be interesting to see how the law evolves to deal with this novel situation.  Please call me on my cell # 316-883-8200 if you need to talk to a lawyer or schedule a free consultation with me.

One response to “Evel Knievel and COVID-19”