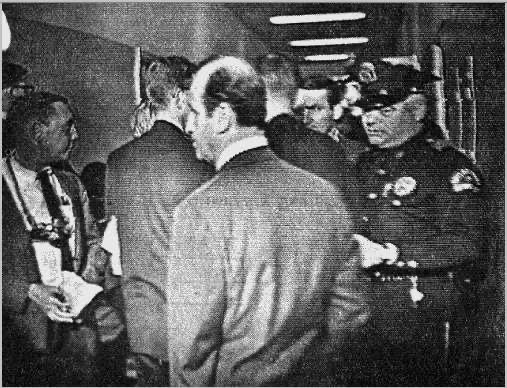 The official version is that President John F. Kennedy was assassinated on Friday, November 22, 1963, in Dallas, Texas by a “lone nut” acting alone: Lee Harvey Oswald. So why does uncertainty linger about the President’s murder?

Oswald never confessed. Most assassins have a political motive and proudly confess. Oswald was interrogated for hours and never confessed. On the Friday night of the assassination, Oswald said in custody, “I didn’t shoot anybody. I’m just a patsy.”  On the video, take a look at :42 and :43. For those two seconds, Jack Ruby, a local strip joint owner with Mafia ties, is seen hanging around the police station. What is this shady character, Ruby, doing inside the Dallas Police Station hours after the murder while Oswald is being interrogated?

Oswald never went to trial. Because within 48 hours of the assassination, that same nightclub owner, Jack Ruby, who had been inside the police station on Friday night, returned, shot and killed Oswald on Sunday as he was being transported from the police station to the county jail.

Since Oswald did not have the benefit of a jury trial, President Johnson appointed the Warren Commission, a group of politicians and government appointees, to resolve the case. They concluded: Oswald fired three shots from behind the President from the Sixth Floor of the Texas Schoolbook Depository with his Manlicher-Carcano 6.5 mm bolt action rifle. (Three empty shell casings were found on the Sixth Floor.)  The gun was found on the Sixth Floor along with three empty shell casings. So what’s the fuss all about?

According to the Warren Commission, one shot missed the motorcade completely. This bullet missed the motorcade by A LOT.  It hit the concrete curb and concrete struck James Teague.  We don’t know the caliber of this bullet, as it was not found. If Oswald fired this shot, it landed so far away from the motorcade that it makes no sense. This would be like a quarterback overthrowing his receiver by 20 yards. 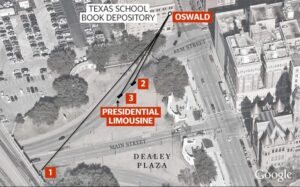 That leaves two bullets to kill JFK and nearly kill Texas Governor John Connally. According to the Warren Commission, the second shot hit Kennedy below the neck, exited his necktie, entered Gov. Connally’s back and exited his chest, causing massive wounds that nearly killed Connally. The third shot, according to the Warren Commission, was fatal and hit Kennedy in the head.

Regarding the fatal head shot, there is substantial eyewitness testimony that the shot came in front of Kennedy, from the picket fence behind the grassy knoll. These witnesses seemed credible. Sam Holland, Ed Hoffman, Gordon Arnold, Jean Hill,  Lee Bowers and others thought the fatal shot was fired from the front. And true to physics, the third shot caused Kennedy’s head to fly backward and to the left. A shot from behind probably would have pushed Kennedy’s head and body forward.

Doctors Weigh In on JFK’s Death

Some of the doctors who fought to save Kennedy’s life at Parkland Memorial Hospital in Dallas thought Kennedy had been shot from in front. Dr. Charles Crenshaw was one.

Some of the doctors in Dallas remember an exit in the back of JFK’s head. They thought he had been shot from the front in the right temple and that the bullet blew a large hole out of the back of Kennedy’s head.

The hole in the front of JFK’s neck, behind Kennedy’s necktie, looked like an entry wound, and one or more doctors assumed he was shot in the neck from the front. That hole was obliterated when the doctors did a tracheotomy. Kennedy and Connally were both hit from the rear in their backs. But the doctors in Dallas thought Kennedy had possibly also been shot from the front: in the neck and in the head – two separate shots. JFK’s assistant press secretary indicated it was a shot to the right temple, pointing to his own temple from the front.

An Arrest is Made

Police arrested Lee Harvey Oswald, an avowed communist who had defected to the U.S.S.R., as the culprit. Oswald did work in the Texas School Book Depository, and the rifle found matched a rifle Oswald bought under a fake name for $12 through a mail order service. He left work after the assassination and was arrested at 1:50 p.m. watching a movie at the Texas Theater.

When Kennedy was declared dead, a Catholic Priest gave JFK Last Rites, and the Texas doctors planned for autopsy. Texas law required that a person murdered in Texas must have the autopsy done in Texas.  Federal agents forcibly took Kennedy’s body away from the Texas doctors and flew the body back to Washington.

An official autopsy was done at Bethesda Naval Hospital in Washington, D.C. Oswald was in custody. His gun and the three empty shell casings had been located, so the story was that one man killed Kennedy – and that he was shot from behind. The autopsy was done hurriedly and its findings did not conflict with shots from behind. The autopsy photos show the back of Kennedy’s head intact. But the doctors in Dallas said the back of his head had an exit wound from a possible shot from the front. Strange, right? Plus the entry wound in the neck was gone, as the hole was enlarged to do a tracheotomy. So the doctor doing the autopsy in Washington, D.C. did not have the benefit of seeing that possible entry wound.

But there were only three shots fired and three empty cartridges. So if Connally was correct, that makes four shots, which means a second gunman. The entire Warren Commission rests on the “single bullet theory” that the bullet that first hit JFK, exited his neck and then hit Connally. If Kennedy and Connally were hit by separate bullets, the Warren Commission is wrong.

Abraham Lincoln said, “Public sentiment is everything.” And most Americans think the Warren Commission’s conclusion that Kennedy was assassinated by a lone nut, Lee Harvey Oswald, was wrong. We may never know for sure.