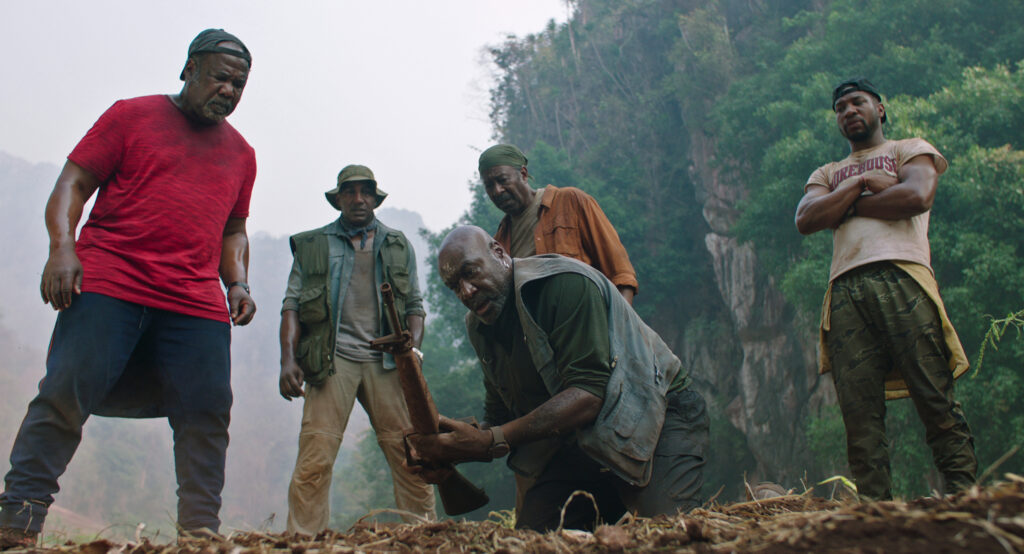 If his new film “Da 5 Bloods” was made about five white Vietnam veterans reuniting in Vietnam to find a buried treasure of gold and to find the remains of their fallen leader, it would still be a great film (due to the intriguing Sierra Madre-like plotline of buried gold and honoring an old war buddy).

The plot is suspenseful and full of potential double-crosses, action sequences, and redemption. As in Oscar winner “BlackkKlansman,” Lee teams up again with screenwriter Kevin Willmott to rework a script begun by two other able screenwriters.

“I ain’t got no quarrel with the Viet Cong.”—Muhammad Ali

This film is unique because it tells the singular story of African-American Vietnam veterans. Lee’s film not only asks the question “Why Vietnam?,” but “Why were one in three Vietnam veterans African-Americans?” Throughout history, our enemies abroad (such as the Soviet Union), loved to stick the knife in and twist it – mocking the USA for mistreating our black citizens at home, while engaging in adventurism around the globe. The film brilliantly starts with Muhammad Ali, basically asking: “Why Vietnam? What have these people done to me?”

This hypocrisy of the USA exploiting black soldiers is exposed pathetically in a rhythmic and haunting propaganda broadcast in the film from a Tokyo Rose-like North Vietnamese broadcaster, Hanoi Hannah (played by a big star and movie director in Vietnam, Ngo Thanh Van.) Her repetitive and poetic questions begin with “Black G.I., Why…”

The phrase “Black G.I.” is repeated in an Edgar Allen Poe-like fashion that simply twists the knife deeper and deeper. One half-expects to hear the word “Nevermore.” It hurts. In a particularly visceral scene, “Da Five Bloods” learn of Dr. Martin Luther King, Jr.’s assassination from a transistor radio broadcast by Hanoi Hannah.

The film starts out with the normal locker room towel snapping of old friends reuniting. Their motive in returning to Vietnam is altruistic, but not all of the characters share that motive at the beginning. We tell ourselves stories that our motives are charitable, when often that is a cover story for selfish motives. Any time five people are seeking to find $17,000,000.00 in gold – don’t expect old war buddies to stick together.

When a great deal of money is at stake, one can expect disagreements and violence. It’s interesting that the tension and paranoia are not about cash, but rather about a natural resource…a simple mineral. In the process of trying to locate the body of their beloved leader, Norman, and the trunk of gold, the four remaining war buddies fall into the same paranoid trap that lead us to Vietnam in the first place. Nations and tribes and people do strange things for money. 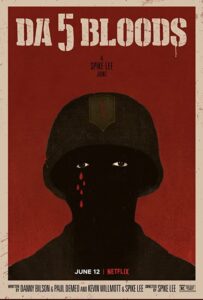 Why did France take over Indochina as a colony in the 19th century? The cover story was that it was about protecting French clergy to spread Catholicism in Indochina. But it was really about natural resources. Lee’s film features two French citizens who serve as counterweights to one another. One is continuing the hustle of exploitation – while the second, a wealthy child of colonialism, is trying to atone for the past.

In the movie, the screen name of the latter is “Hedy Bouvier” (played by Melanie Theirry.) Bouvier mentions Hedy Lamarr, the bombshell film star. (Sidenote: deft viewers recall that Lamarr was much more than a pretty face: she co-invented a radio signaling device, or “Secret Communications System,” which helped us vanquish Nazi Germany.) Her surname “Bouvier” reminds the viewer of Jackie Bouvier Kennedy. I was not surprised the name “Jackie” appears later in the film for a related character.

Meanwhile, the unreconstructed colonialist, played by Jean Reno, has the surname “Desroche.”  He wears a white suit like one of the Nazi-affiliated villains in an Indiana Jones movie who always shows up to take the treasure from its rightful owner (i.e. “Doctor Jones, we meet again. Hand me the Holy Grail.”)

Desroche scoffs when one of the Bloods point out that the USA saved France in World War II from “goose-stepping Nazis.” And I’m pretty sure his sidearm is a German luger pistol. But Otis (played by Clarke Peters) assures his mates that Desroche is trustworthy. His old flame in Vietnam credibly vouches for Desroche.

Would Vietnam Fall to Communists, Leading to a Domino Effect?

American intervention in Vietnam was sold to the public as a last chance for us to stop the “Red Menace.” We were told that if Vietnam fell to the Communists, other countries in Asia would fall like dominoes and that the U.S. would be at the mercy of the U.S.S.R. But the French characters remind us that it’s not all about Communism. One of the Bloods reminds his friends that their fallen leader, Norman, had warned them not to “drink the anti-communist Kool Aid.”

Delroy Lindo, who plays Paul, is the one Blood whose motives drift away from altruism to personal gain. I first noticed Lindo in the movie Ransom (1996) as the FBI man helping Mel Gibson and Renee Russo handle the ransom of their kidnapped son. In that film, we learn that most folks would do just about anything for $2,000.000.00. But in this film Director Lee ups the ante to $17,000.000.00 in gold bars.

What would you do for $17,000.000.00? What would the Viet Cong or the USSR or the USA do to keep hold of Vietnam, a land with vast deposits of oil, rubber, minerals and a wealth of other natural resources? The desire for more makes people do crazy things, violent things, immoral things. 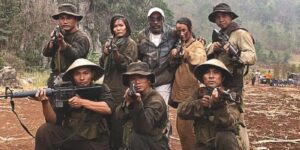 The Vietnam War was a horrible situation for everyone. We have seen it portrayed in a dozen or more films, but this one focuses expressly on the plight of the black soldiers. I didn’t know how awful the Vietnam war was until I saw “The Deer Hunter” (1978) as an 18-year-old. That spectacular film tells the journey of about the same number of war buddies–white working-class stiffs from a steel town in Pennsylvania. Lee’s “Da 5 Bloods” tells the story strictly from an African-American gaze.

Real or Fake News: “In the Struggle Against Lies, Art Has Always Won – and Always Will.”

Americans are drowning in misinformation while being warned of “fake news.” It’s hard to know how to combat lies. What will help is good art – as in don’t tell, but show. As Solzhenitsyn wrote, “Writers and artists can do more: they can vanquish lies! In the struggle against lies, art has always won and always will. Conspicuously, incontestably for everyone. Lies can stand up against much in the world, but not against art.”

If America survives this confusing and terrible time, it will be because of a lot of good art.

“Da 5 Bloods” is a good start in exposing a raw nerve in the history of American race relations. Hollywood’s knock on black-cast films has always been “they don’t make money.” Oprah Winfrey’s film “Beloved” (1998), based on Toni Morrison’s novel, is one example Hollywood’s cites to avoid making black cast films. It didn’t do well at the box office, so it was thrown in the face of filmmakers: “‘Beloved wasn’t a box office smash, so why should Hollywood risk money on another black cast film?”

With recent films Chi-Raq (2015), BlackkKlansman (2018) and now Da 5 Bloods, Lee and Willmott  disprove the lie that black cast films can’t do well commercially. And in making superlative art, they expose a larger audience to stories most haven’t heard…but should. Lee’s movies are about race – but they are not, to use an antiquated phrase “race films,” that are primarily seen by black audiences. Movies with primarily black casts are no longer segregated and deemed unprofitable. This means that lots of white folks are watching the films, and getting “Woke.” And Lee is no longer sitting in the corner on Oscar night, watching others take away his rightfully earned gold.