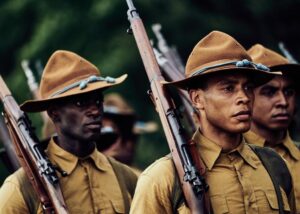 Director Kevin Willmott’s film “The 24th” tells an important but little-known story in American race relations: the Houston Mutiny of 1917. In the same way that many Americans are learning about the Tulsa Race Massacre of 1921 for the first time, Willmott’s film introduces Americans to another-century old hidden but important story. The script is written by Willmott and a former KU pupil, Trai Byers. This analysis of the film tells what happens, so a spoiler alert is in order.
The charismatic Kansas native Trai Byers not only co-wrote the script, he plays the lead role of William Boston, a light-skinned private who is viewed by other members of the all black 24th Army Infantry Regiment as “not one of them” due to his light skin and the fact that he has a degree from the Sorbonne in France. Boston lived in France during peacetime and saw what was possible in the United States because he experienced no racism in France.
Some critics see the love story between Boston and a seemingly haunted local woman, Marie, as an artificial plot device stitched into the story of the Houston Mutiny of 1917. But the romance between William Boston and Marie is the heart of the movie’s message. To say that the romance between Pvt. Boston and Marie is something grafted into the story of the Houston Mutiny would be like saying that the romance between Adrian Pennino and Rocky Balboa in Rocky (1976) is superfluous and is stitched into a boxing movie.
Marie (played by Aja Naomi King) has darker skin than Boston. She has never traveled, having spent her whole life in Houston, a preacher’s daughter. She knows that William Boston’s bromides about “life liberty and the pursuit of happiness” are a fiction for black folks like her in the Deep South in 1917. Boston does not fully know the depth of the problem or that the sacrifice the solution will require.

Marie is not well-educated like Boston but growing up as a Pastor’s daughter has made her into an extraordinary pianist. Her folks are dead, and she is no longer playing hymns in church. Now her piano brings to life the ragtime music of Scott Joplin, Eubie Blake and other luminaries. She has only listened to their records: Boston has seen them in concert in New York City. Marie is a gifted ragtime pianist who  could make it in Harlem in the music scene, but she seems chained to her hometown of Houston, afraid to venture north due to her shame and sense of unworthiness.