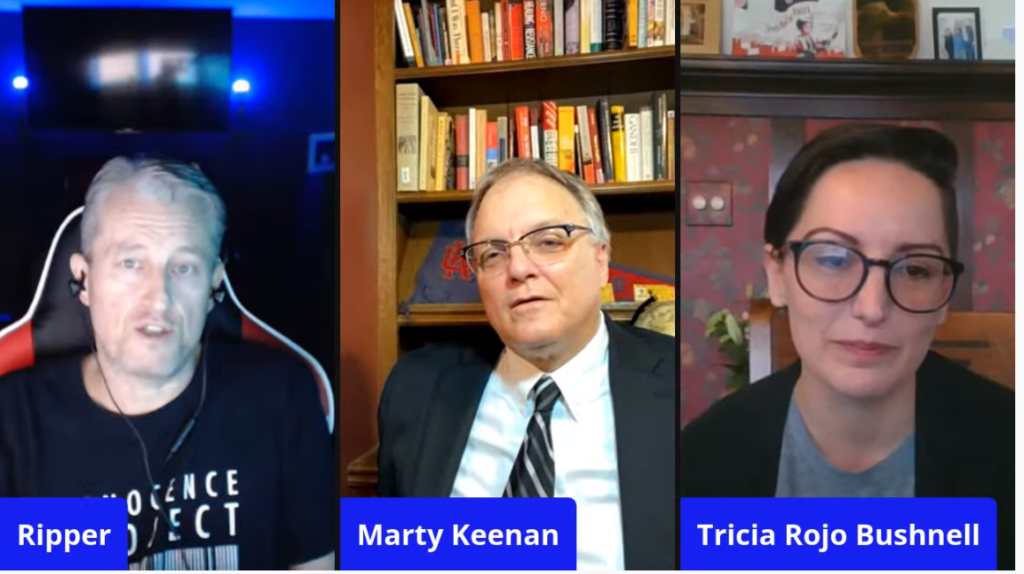 Making a Murderer (2015) is a too-wild-to-be-true NETFLIX series about the conviction of Steven Avery, a salvage dealer, who served two decades in prison for a crime he did not commit. He was exonerated and released. He promptly filed a thirty-six million dollar lawsuit against the local police for framing him.  He was on Easy Street. Free at last, and soon to get a settlement or verdict in the tens of millions against the local police.  Then disaster struck.  The same police who cooked up his wrongful conviction twenty years earlier successfully pinned a murder on him.

I was interviewed Sunday on a broadcast by Jack Smith on RipperJack Media on Youtube live.  My friend Jack Smith, who recently helped me in my role as Kansas NAACP attorney to issue a report on racism at Highland Community College, just happens to be an expert on Making a Murderer. And get this all you cool cats and kittens: Jack is in Florida right now hunting down the real killer of Carole Baskin’s late husband Don Lewis.

The three-hour live show can be accessed here. Erin Moriarity of CBS 48 Hours was a guest, in addition to Tricia Rojo Bushnell of the Midwest Innocence Project.  The Midwest Innocence Project helps those wrongfully convicted of crimes. Some estimate that the percentage of inmates who are wrongfully convicted ranges from 2% to 7%.  There are many reasons for wrongful convictions, but this blog post deals with perhaps the most common: mistaken eyewitness identification.

The most important guest on the show, Adam Braseel, has, as Ronnie Milsap would say, a story “much too sad to write.” At age 24, Adam was found guilty of first-degree murder in Tennessee and given two life sentences.  But he was innocent.  After 12 years in prison, it was discovered that Adam had a doppelgänger–a guy who looked just like him, who actually committed the grisly murder. But two eyewitnesses had identified Adam as the man who committed the crime. But they were wrong.

Have you ever been mistaken for someone else? When I taught Criminal Justice at Butler Community College, I would ask my students that very question. And usually, several students in each class had a story about how people get them mixed up with another schoolmate.

We were in Breckenridge, CO a few years ago, and a random guy walked up to my oldest son, Tyler, and asked him: “Are you Matty Mullins, the singer with Memphis May Fire?” I had never heard of the guy. But when I looked him up on the internet, he looks incredibly like my oldest son.

It’s fun to get mistaken for someone else. Unless that someone else committed a grisly murder. Then you’ve got a problem on your hands. When the Prosecutor says: “Could you identify the man who pointed the gun at you on August 16, 2019?” and the witness says: “The man sitting next to Mr. Keenan,” it’s devastating.  It’s like “My Cousin Vinny.” You’re toast unless Joe Pesci and Marisa Tomei come up with a plan.

Although jurors think eyewitness identification is accurate, studies in recent decades have shown eyewitness identification isn’t as good as people think.  On the program Sunday, I mentioned the fate of Ron Cotton. Ron Cotton didn’t rape anybody.  So when the local fuzz in Burlington, NC called him for a few questions, he was glad to help out.  They asked him where he was on a certain night in July 1984. He thought for a few seconds and told police he was out-of-town that weekend. The trouble is, he got his weekends mixed up. The police knew he was in Burlington, N.C. on the date in question. The victim, Jennifer Thompson, identified him in a police line up shortly thereafter.

Eleven years later, DNA proved that the actual rapist was Bobby Poole. Even when police told Jennifer she had the wrong guy, she was still convinced it was Cotton. She finally accepted that she was mistaken. Today the pair travel nationwide to talk about the perils of eyewitness identification. The Sixty Minutes piece by Lesley Stahl is superlative.

Trisha Bushnell of the Midwest Innocence Project was on the program with me. Her group freed LaMonte McIntyre, who, as a 17-year old high school senior was convicted of a double murder. After twenty-two years in prison, the Midwest Innocence Project got his wrongful conviction set aside, thanks to intrepid and dogged work from Bushnell and lawyers Cheryl Pilate and Melanie Morgan. What cost McIntyre the best years of his life? A witness mistook him for the real killer. Faulty eyewitness identification is a leading cause of wrongful convictions.

In my next article, I will address the police interrogation of 16-year-old Brendan Dassey, the nephew of Steven Avery In MAKING A MURDERER. Who would commit a murder and ask his high school nephew to help hide the body?

Having taught Criminal Justice to countless students, I reminded them that there are two good reasons to avoid a wrongful conviction: 1) It is an unspeakable injustice to the innocent person, and 2) the guy who actually committed the crime is out there doing it again.

One response to “Making a Murderer and Tiger King: My Recent Interview”